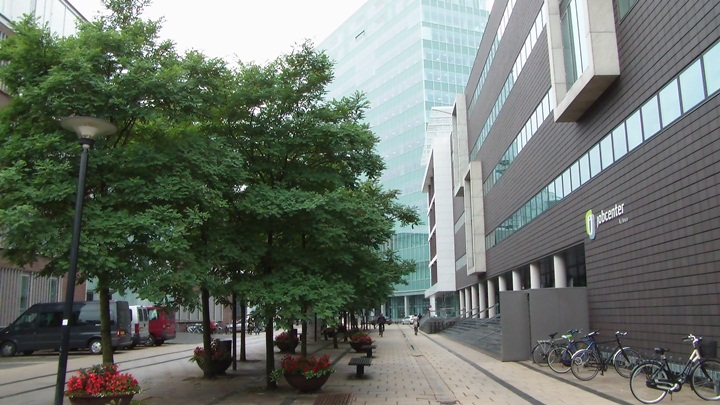 WHEN A PLACE CHANGES ITS TUNE #1

“We racked our brains and the city to find a suitable space. Lots of spaces were nice and cosy and basically unproblematic. We decided to look for less ‘happy’ spaces – ugly, boring, dismal or haunted spaces – and try to find a way to provide them with a positive element. We were attracted by the idea of using existing objects in the work, mainly sound. A kind of readymades.
The choice of space for the first sound installation fell on the square in front of the city’s largest unemployment centre and the Employment Department in Værkmestergade, Aarhus C.

It has a very city planned, futuristic look. Sim City in real life. This urban space can be described as controlled, monitored, regulated and proportioned, and is colored by the two heavy institutions that are situated there.
The idea was to give the place the sound it missed, simply the opposite; the sound of the wild – uncontrolled –  unproportional – A sound that symbolizes, lightness, freedom and pure nature.

The sound of the space was then developed from an analysis of the space itself: What are the acoustics, the visuals and the architecture of the space? What objects and materials are dominating? Which role does the space have in the social life of the city, how do people move here, what do we read into them? How is the space perceived, and what meetings are possible here? What is the memory of the space, which stories are connected with it? What socio-political references, what kind of culture-nature relationship, what conflicts are there, hidden or obvious?
We decided that what this place needed was a jungle soundscape….”

Accordingly, we placed a number of small speakers in the trees of the square, from where we played a soundtrack from the African jungle.
For many benefit recipients and users of the unemployment system, this area is a jungle. Going to or being in this urban space can at times be both difficult and humiliating. It may indeed feel like inaccessible terrain for both body and soul. To transform the trees of this place into a jungle was thus both a picture, a comment and an aesthetic experiment – which succeeded – to the great joy of the users, the employees and passers-by.
As one of the employees remarked:  “It was as if that sound was just what was missing.” And going to the unemployment centre somewhat easier. 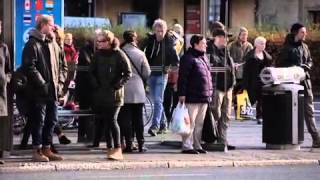 WHEN A PLACE CHANGES ITS TUNE # 2

We seek to embrace the internationality of the place. Furthermore, to break its boundaries. We would like to establish a contact to each passenger and thereby confront the place with its anonymity.

We hope that the travelers at the bus stop will give a little smile – in unity.