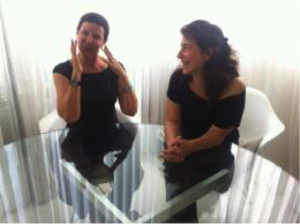 A Danish-Israeli performing arts experiment exploring whether documentary theatre is more ‘trustworthy’ because it is based on memories, and whether the claim “memories are objectively true” is reliable.

The experiment tested the credibility and the “validity of truth” of memories in different experimental setups where mothers and daughters separately recall joint significant episodes. Afterwards the joint memories were studied in order to identify their credibility regarding time, place, gallery of characters and emotions.

The Mothers and Daughters Memories Experiment is an investigation of some of the components of documentary theatre. An investigation of memories, stories and truth. It is also research for an Danish-Israeli performance project about mothers and daughters.

3 Israeli actresses with their mothers (2 of them alive, 1 in memory), and 1 Danish actress with her mother meet at Laboratoriet to dive into their shared stories and memories. But is there an objective truth when we talk of memories? What makes a memory – or a story – sound true?

Why is it that theatre audiences are fascinated by documentary theatre? Why do they want to see people on stage who are not actors, who are telling their own stories? Real people, or what Rimini Protokoll call ‘experts’. Why does it seem more credible when memories are so elusive?